Glen Dahlgren is an award-winning game designer and the author of the young adult book series The Chronicles of Chaos, which fantasy legend Piers Anthony called “what fantasy fiction should be.”

Firstly, congrats on your book baby making its way out into the world. It sounds like a ripper of a series! If you could go back to the start of The Child of Chaos’s publishing journey and give yourself any advice, what would it be?

Mostly, get moving! It took me 20 years to complete this book and get it published. That said, I learned a lot in that period that enabled me to take this step. But I’m really hoping it takes me far less time to publish my next book!

You have had a very impressive career in the gaming industry, was it always a dream of yours to write books or was it just a natural progression from computer game story telling?

Actually, making games was my dream and I lived it for a long time. In the course of doing that, I was able to create stories inside the worlds of established SF and fantasy authors. While I truly enjoyed that, there’s nothing as satisfying as constructing a world and characters of my own and releasing it into the world.

Also, making games is a team activity. I love working with talented people to bring something extraordinary to life—but this book is truly my baby. That said, even the Child of Chaos owes a lot to my beta readers, my cover artist, and my son who drew the interior illustrations. This novel wouldn’t be the same without them.

Can you tell us a little about how you come up with the idea for The Chronicles of Chaos?

It actually started as a premise I created for a computer game–but upon reflection, I realized it wasn’t a game at all. At that moment, even though I had never written a novel before, I knew this would be my first. I just didn’t suspect it would take 20 years to write!

It all started out with a simple question: what if there was no real difference between good and evil? In a world governed by temples, each representing a different god/aspect of Order, good and evil (among many others) were just two equally respected callings. But those who had had no calling to any temple were “faithless”, and that was much worse.

I am looking forward to reading The Child of Chaos now that it is out in the world. What are you currently reading (or what was the last book you read)?

Ocean at the End of the Lane by Neil Gaiman, The Shepherd’s Crown (and all the other Diskworld novels) by Terry Pratchett. I guess I have a penchant for fantasy writers from the UK! But my inspirations are the classic fantasy authors, like Robert Jordan, Terry Brooks, Margaret Weis, Tad Williams, and many more.

Thank you to Glen for popping in for a chat. 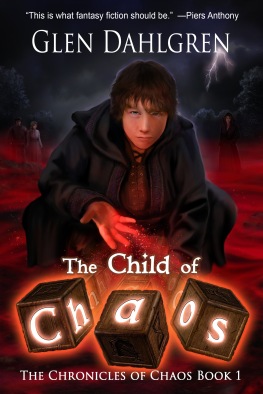 “This is what fantasy fiction should be.” —Piers Anthony, New York Times bestselling author and fantasy legend.

Galen loves dreaming up stories, but he never expected to be pulled into a nightmare.

An irresistible longing drags Galen to an ancient vault where, long ago, the gods of Order locked Chaos away. Chaos promises power to the one destined to liberate it, but Galen’s dreams warn of dark consequences.

He isn’t the only one racing to the vault, however. Horace, the bully who lives to torment Galen, is determined to unleash Chaos–and he might know how to do it.

Galen’s imagination always got him into trouble, but now it may be the only thing that can prevent Horace from unraveling the world.

“There is a quality of imagination and detail here that impresses me. This is no ordinary sword and sorcery story. [Glen Dahlgren] is a novelist who I think will become more widely known as his skill is appreciated.” —Piers Anthony

To find out more about Glen and The Child of Chaos, visit Glen’s Blog or Goodreads, or to purchase head to Amazon AU, Amazon US & Bookdepository.

← Frankie and the Gift of Fantasy: Book Spotlight
WHAT AM I DOING: Life & Blog update? →