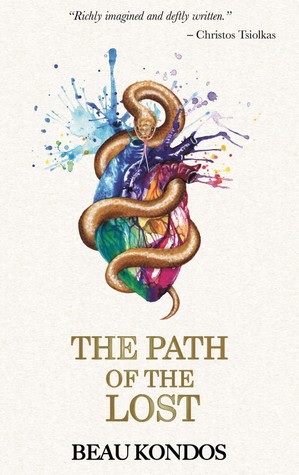 The first book in a timely fantasy series about discovering the power of representation and perception in a world without art.

Zynthia is a Delver of the Cosm, one of the last of her kind. She has the ability to unleash the power of art, melody and narrative in a world that has outlawed creative expression. After her grandmother’s death, she is left to Delve on her own in the hope of discovering a lost ‘key’ that could preserve the Cosm’s light and save her world from fading into oblivion.

A single painting leads her to James, a man who is caught between two worlds.

After forming a fragile alliance with a Guardian and a rebel, Zynthia and James embark on the Path of the Lost. This ever-changing trail is haunted by forgotten creatures and secrets of the Cosm’s past.

Is James really the key Zynthia has been searching for? Can he learn to harness the power of his art to help in the battle against the Lost? Or has Zynthia’s Delving initiated a chain of events that will plunge her world into darkness forever?

Capturing themes of imagination lost, sexual awakening and coming to terms with the psychological anxiety of becoming independent, The Path of the Lost explores how the power of creativity can be used to unlock the colour caged inside a seemingly grey world.

THE PATH OF THE LOST HEART WAS PUBLISHED ON THE 2ND OF JULY, FIRSTLY CONGRATULATIONS! CAN YOU TELL US A LITTLE BIT ABOUT THE INSPIRATION BEHIND IT, OR HOW THE STORY CAME TO BE?

Thanks so much, Sarah! Inspiration tends to always flow in from multiple directions but I guess the main one was witnessing the rapid evolution in technologies and the consumer habits that formed around them.

Back in high school mobile phones only sent texts and made phone calls, so I’d rarely see anyone enthralled by a screen on the train home after school. Now you see mobiles, iPads and Kindles everywhere on public transport. I’m all for technological advances, but it got me thinking of some of the consequences of the decrease in ‘dead time’ we once had so much of. If there’s always an app or a group chat that can easily distract us, where do we find the free time to really process the day’s events, and just tune out and experiment with our imagination?

My storyworld is based in the Cosm, and it was inspired by this dilemma. The Cosm is a world where creative expression has been outlawed where most people have the time to explore their imaginations, but they don’t want to. The story asks some pretty big questions about what could potentially happen when we don’t make the time to explore what’s going on in our heads and the world around us.

CAN YOU TELL US A LITTLE BIT ABOUT YOUR PUBLISHING JOURNEY WITH THE PATH OF THE LOST?

It’s very hard to get picked up as a debut author. Usually the big Aussie publishers won’t look at your stuff unless you have an agent and unfortunately for Aussie writers, young adult fantasy has a bigger market abroad than at home. I couldn’t find an agent to take me on to sell the novel locally, so it felt like my hands were tied. Publishing locally was something that was very important to me, so I created a Kickstarter crowdfunding campaign to plead my case. Fortunately there was an overwhelming response to ensure The Path of the Lost was published on home turf first, so I was able to use the funds to have my manuscript professionally edited and printed in Australia. Now I’m currently working on finding a publisher abroad.

IF YOU COULD GO BACK PRE-PUBLICATION DAY AND GIVE YOURSELF ANY ADVICE, WHAT WOULD IT BE?

Learn to say no. I’m a social animal and I find it quite difficult to say no to invitations to social events. Self-publishing has been an enjoyable challenge, but it does eat up a lot of my free time. Sadly I’ve been using my writing time to work on things a publishing house would traditionally do, when I should’ve left my writing time as is, and said no to social events instead. Friends mean a lot to me, and I feel terrible saying no to them haha.

ARE YOU WORKING ON ANYTHING AT THE MOMENT, BOOK TWO PERHAPS, CAN YOU TELL US ABOUT IT?

The Path of the Lost was originally double the size. Book one was the first half of the novel, however during my six years of writing it evolved so much, that the second half needs to be re-written. I hadn’t planned for the characters to take control and end the first instalment the way that they did. I discovered that one of the rewards of writing was witnessing the characters grow organically. They revealed that there was a bigger story to tell, and a different path I needed to take to do so. I can tell you that the second novel will deal with heavier themes but it will introduce a few new characters and highlight the complexities of what makes a villain.

WHAT ARE YOU READING AT THE MOMENT OR WHAT WAS THE LAST BOOK YOU READ?

I just finished Circe, which had been sitting on my TBR pile for so long. I’m a huge mythology buff and from the first chapter I fell in love with Madeline Miller’s writing. It’s really poetic and lyrical and she’s done such an excellent job of tying together some of my favourite Greek myths into a single narrative with a powerful protagonist. It’s quite beautiful.

THANK YOU SO MUCH TO BEAU FOR TAKING THE TIME TO ANSWER MY QUESTIONS!

It’s been a pleasure. Thanks, Sarah! 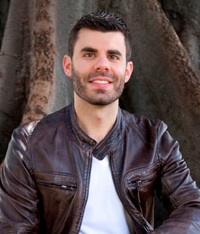 Beau Kondos grew up in Melbourne and was captivated by strong women kicking arse on TV. After realising he wasn’t cut out to save the world, he started training to be a geeky sidekick by soaking up the contents of Greek mythology and philosophy books.

He has a double bachelor’s degree in media and communications/commerce from the University of Melbourne and a graduate diploma in creative media from RMIT University.

One of the highlights of his career was working for a not-for-profit, where he met many undiscovered superheroes. When he’s not working at a publishing house, you’ll find him travelling the world on a food adventure or making big decisions at his local supermarket’s ice-cream freezer.

← The Art of Taxidermy: YA Review
Dreaming Big: Guest Post by Brian Wilkinson →