The Inspiration Behind Stuck On Vacation With Ryan Rupert

Pagan is the author of Stuck on Vacation With Ryan Rupert (Ryan Rupert Series) and Lanterns in the Sky (Starlight Chronicles Series).

I was inspired to write Stuck On Vacation With Ryan Rupert—a YA contemporary suspense novel—while on vacation with my friend back in Grade 9 (so I was roughly 14 at the time).

Like many young teenagers exploring the new, exciting world of being a teenager, having relationships, and growing into maturity, I was really wrapped up in the concept of romance and getting my first boyfriend. It just so happened that at the time I really liked this one guy (I thought he was cute, and that was the basis of my crush), but nothing ever happened between us. We had separate classes, there was no force pushing us together at all. So I never acted on it, or really attempted to get to know him. I thought he was way out of my league and he would never date someone like me anyway. But the fantasy was still nice, and as a creative, fantasies are something I always hold onto.

So as I mentioned above, at the end of Grade 9, I was invited by my best friend (at the time) to join her family on their vacation to Daydream Island. I’d been there before, it was very nice there, but I’d never stayed for a week, and even to this day I really value my privacy when it comes to sharing rooms. If at all possible, I like to stay with close friends or just by myself, so it was already uncomfortable to me that I had to share the room with my friend, her dad, and his girlfriend.

But my mum had raised me to be grateful and the trip had been paid for me, so of course, I didn’t turn it down or complain.

Another fun fact about me is that I really dislike the ocean and swimming in general—I was never a strong swimmer growing up and I hate being cold, so the appeal of going for a dip in the sea wears off pretty quickly once my legs get tired and I start shivering. And while on this island, I found that there weren’t many activities to be doing that didn’t require going into water, so I was quite bored sitting around at the pools and such. It wasn’t exactly hellish or a nightmare, but it was far from ‘fun’, to my personal standards anyway.

While sitting there, daydreaming, I came up with this idea. Just a thought—a funny thought at the time, as I imagined how weird and amusing it would be if I ran into my crush while stuck on this island. In my teenage fantasy, it would give us an opportunity to get to know each other better (with the ideal outcome being a sometime romance).

Of course, that was never going to happen, but slowly, I started to piece this story idea together about a girl with a mortal enemy (based on my crush) who is forced to come to this island paradise. I gave her an exaggerated fear of the sea, which helped create the same kind of conflicts I’d been facing. The concept was perfect!

Two people who hate each other stuck in an island paradise with no choice but to get along (as they were forced to share a room), or tear each other apart.

Not to mention that one is a coward when it comes to the ocean, and the other is adventurous, egotistical prankster who torments the main character at every opportunity he has.

By the end of the trip, I was itching to get the story down on paper, and I spent an entire week straight just binge writing the book. I rocked up to school on Monday to start the new term and dumped a manuscript at my friend’s table.

While the inspiration is a little weird, looking back, I don’t regret it. Maybe one day that guy will find out Ryan Rupert is based off of him (or at least, how I’d imagined him to be), but to be honest, I think I prefer my fantasy as just a fantasy. I get to have a lot more fun with it that way—like adding random psychopaths with a mysterious past to the mix, and creating a completely unique and adorable couple who always seem to captivate my readers.

My fantasy was just a fantasy, but my story is for everyone to read and enjoy. 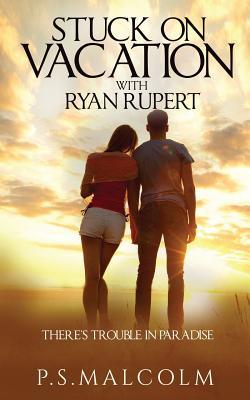 Aubany Winters’ life soon becomes a nightmare when her mum gets cancer and has to leave for California with her dad. Left with her neighbours, the Ruperts, and to her displeasure, their son Ryan, she finds herself forced to tag along on their family vacation to Nula Island. There’s just a few problems, like her fear of the ocean, her and Ryan’s mutual hatred for each other, and the psycho girl who is trying to kill them. Will Aubany overcome her fears? Will she and Ryan ever stop hating each other? Or will their flaws and disagreements lead them right into the enemy’s hands?

P.S.Malcolm (Pagan) grew up in Proserpine, Queensland— a small, Australian country town on the edge of the Great Barrier Reef. She was a storyteller from a young age and spent years perfecting her craft.

For two years, she juggled waitressing in tourist filled coffee shops while undertaking two degrees in Creative Writing online— one specializing in children’s fiction and publishing. She has always had an interest in writing, but never saw herself working in the industry until she made the choice to self-publish her debut novel, STUCK ON VACATION WITH RYAN RUPERT. Realizing that she loved the process of publishing her book, she pursued an internship at a publishing house and snagged a spot as Pen Name Publishing’s Marketing Assistant.

In between interning and writing, Pagan opened her first business working as a freelance Marketing Strategist for Paperback Kingdom— which helps indie authors with all aspects of their author careers.

Pagan is a cat enthusiast, tea lover, and floral fanatic. She keeps a well-stocked tea collection, and one of her favourite past times is rocking up to a cozy teashop in a worn pair of jeans and writing a few pages of prose. If the ‘florals’ weren’t a dead giveaway, she’s a proud Hufflepuff and is crazy about the colour yellow.

Pagan also enjoys reading— particularly fantasy and paranormal— and is a passionate blogger. She reviews books that she has read on her personal website, and indie books on her business blog. Some of her favourite and most influential authors include Amanda Gernentz Hanson, A.G. Howard, Marissa Meyer and Michele Jaffe.

Her newest book, LANTERNS IN THE SKY, is set to be released by The Parliament House Publishing in Spring 2019.