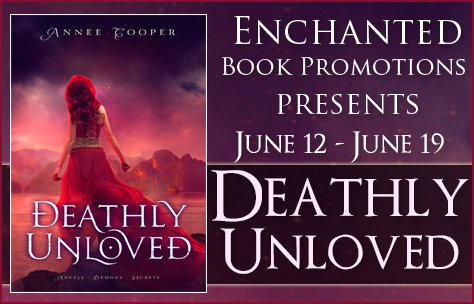 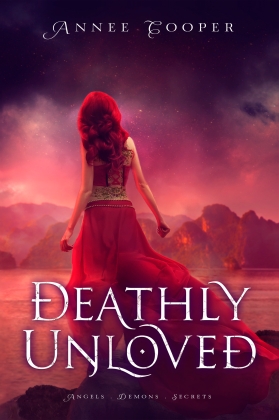 Being raised as a nephilim has its drawbacks when you’re only quarter angel. Now it’s getting dangerous.

Rune’s always known about the angel blood that runs through her veins. A gift—or a curse—from her halfling mother. She thinks she knows who she is. She’s wrong. After a kiss with a stranger completes a sacred ritual, she’s forced to accept the other side of her heritage. And the lust for souls that comes with it. Now this gorgeous seductress is on a hunt to find others like her and discover the truth about her past. But with her hunger growing insatiable, does she have more to worry about than making friends?

“If I leave, will you kiss him? Or any other humans?” the boy asked.

“I didn’t plan on kissing anything that wasn’t human, but if a cute angel comes along I might change my mind.” Rune gave him a cheeky smile.

He made a face and clenched his hands. With a loud sigh and a stomp of his boot, he reached for her hand. Rune glared at him, but her face softened when she saw how pained his expression was. She didn’t back off when he moved closer.

“We don’t even know each other,” he mumbled. His fingers brushed her cheek, then her lips as he searched her eyes. “Say it’s all right.”

Strangely, she wasn’t uncomfortable with the idea. This guy was possibly the first ethereal her age she’d come across. He might be a little curt, but he was also gorgeous, and his touch felt welcome on her skin.

Unable to keep herself from eyeing his mouth, the desire to kiss him turned to an ache.

“Yes.” She inhaled a ragged breath and her hands slithered around his neck, her fingers winding themselves in his hair. “I’m shaking,” she said, still fixated on his lips.

“Me too. It’s because we should have already done this at our age. It’ll be more intense be—”

“Shh.” She finished the sound by pressing her lips into his.

The gentle start became a heated wrestle of hot mouths. Rune drew him deeper and he pulled her tight against his body. Her nerves screamed at her.

Rune lost all sense of being separate. Her spirit welcomed him, opening up to expose her essence. A sweet, icy fire burned through her mouth into her body, igniting her cells and quenching a fierce thirst. It felt like she was inhaling menthol and liquid sugar straight into her veins. The energy between them slowed to a stop and they broke apart, instantly back in reality. Rune fell against the wall, breathless and dazed with shock. Her back felt all tingly, a cold sort of tickle that raced across her skin. The boy didn’t look so harmless now. The whites of his eyes had been completely swallowed by black. All that was left of his irises was a thin ring.

“When they said intense I never thought…” He leaned heavily on the hall table.

“Your eyes,” Rune said in a fragile voice.

Still trembling, Rune slid down the wall to the floor. That was not what kissing was supposed to be like. She was obviously delirious. Someone must have spiked the vodka. That or this house had a serious hallucinogenic mould problem.