A Crucible of Souls by Mitchell Hogan 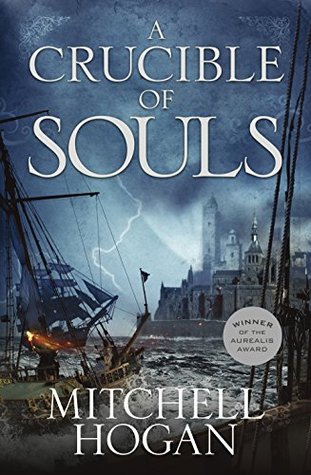 A Crucible of Souls (Sorcery Ascendant Sequence #1) by Mitchell Hogan

In 2009, Mitchell Hogan quit his job in banking to write and self-publish A Crucible of Souls. If was a wise choice as he went on to sell over 30,000 copes, win the 2013 Aurealis Award for best Fantasy Novel and pick himself up a six-figure global deal with Harper Collins to have the series published in print.

So a BIG thank you to Harper Collins and Mitchell Hogan for allowing me a copy of this book to read and review!

An imaginative new talent makes his debut with the acclaimed first installment in the epic Sorcery Ascendant Sequence, a mesmerizing tale of high fantasy that combines magic, malevolence, and mystery

After young Caldan’s parents are brutally slain, the boy is raised by monks who initiate him into the arcane mysteries of sorcery.

Growing up plagued by questions about his past, Caldan vows to discover who his parents were, and why they were killed. The search will take him beyond the walls of the monastery, into the unfamiliar and dangerous chaos of city life. With nothing to his name but a pair of mysterious heirlooms and a handful of coins, he must prove his talent to become apprenticed to a guild of sorcerers.

But the world outside the monastery is a darker place than he ever imagined, and his treasured sorcery has disturbing depths he does not fully understand. As a shadowy evil manipulates the unwary and forbidden powers are unleashed, Caldan is plunged into an age-old conflict that will bring the world to the edge of destruction. Soon, he must choose a side—and face the true cost of uncovering his past.

Far out this book was stressful! My dreams were haunted by the characters – and I don’t mean either of those as a bad things.

From the synopsis I thought this book was going to be all about Caldan, but it’s much bigger than that. The prologue sucked me in straightaway; I didn’t know who these people were but I wanted them safe. Not too many pages in and we find out the prologue people were in fact Caldan Grandparents and Mother. It was obvious they had to be some sort of ancestors to Caldan as it was the perfect way to kick the story off, giving us a glimpse into the past. I will add that Grandma and Granddad were kickass powerful. In this first book we never find out exactly by who their killers were or why they were killed. But I’m sure that will be brought up in the second or third book as Caldan strives to find out the truth behind his heritage.

Extremely early on Caldan is forced to leave the monastery thanks to a kafuffle with one of the other students. We travel with Caldan from the sheltered monastery to big bad Anasoma. In Anasoma Caldan learns the ways of his new home the hard way when he gets mugged and receives a serious ass whooping when he accidentally wanders into the slums. Never the less he makes some friends in Miranda, the love interest, and Master Simmon, who goes on to give him the unprecedented position of Apprentice Protector.

So we’ve gone through 100 pages following Caldan only to move onto another set of characters. At first I couldn’t figure out what was going on, but as Aidan’s chapters continued it became evident the importance of his actions and that we were being shown things that were going on in the background of Caldan’s world. We follow Caldan for a few more chapters then we get dropped someone new again, Amerdan, and again with, Vasile. Now following four story lines we really start to see the rich and complex world Mr Hogan has created. We meet so many intricate and important characters but the story still manages to flow well and remain easy to read/understand.

We spend most of the time with Caldan but every now and then check in with the others to keep a broad view of what is happening. In this book Caldan’s and Amerdan paths cross, Aidan and Vasile’s cross, but the four never end up together, it seems enviable that they will at some point during the series.

So while only Caldan is mentioned in the synopsis and yes we probably spend the biggest percentage of the book with him, the other three charters and their stories lines are extremely important to the world Hogan immaculately builds.

Towards the end of this book Caldan shows just how powerful he is and because of this I think he’s in a lot more danger then he realises. I am really on edge about the traveling party Caldan is with at the end of the book, in which Amerdan is included, it can only mean trouble. Poor Miranda is left brain dead from evil sorcery. And I was left questioning who the bad guys really were. There are a fair few things left open at the end of this book and it sets up some epic show downs and discoveries to come.

When he was eleven, Mitchell Hogan was given the Hobbit and The Lord of the Rings to read, and a love of fantasy novels was born. He spent the next ten years reading, rolling dice, and playing computer games, with some school and university thrown in. Along the way he accumulated numerous bookcases’ worth of fantasy and sci-fi novels and doesn’t look to stop anytime soon.

His first attempt at writing fantasy was an abysmal failure and abandoned after only one page. But ideas for characters and scenes continued to come to him and he kept detailed notes of his thoughts, on the off chance that one day he might have time to write a novel. For a decade he put off his dream of writing until he couldn’t stand it anymore. He now writes full time and is eternally grateful to the readers who took a chance on an unknown author.

Mitchell lives in Sydney, Australia, with his wife, Angela, and daughter, Isabelle.