Growing up too fast!!

Tomorrow my little baby boy will be seven months old. Today he started to wear “Toddler” Nappies, yes my seven month old son is now wearing nappies for toddlers. Riley’s not a Fat baby if that’s what you’re thinking, No he’s just a big boy! Built like a rugby player, solid and strong. I’m rather upset about it, he’s growing too fast!!!! And also tomorrow I’ll be another year older! Yep I’d say I’m not going to have a good day tomorrow, but I’ll try to stay positive! 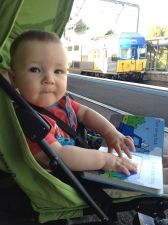 So on Friday Riley had his first Train ride and his first trip to Sydney. Everything went quite well and he was well behaved, be it quite noisy on the train trying to talk to everyone in his own way, but he seemed to enjoy himself. He was so tired from his Sydney adventure that he fell asleep on my lap while I was giving him his bottle, he hasn’t done that since he was about three months old. He was fast asleep in my arms, I managed to change his nappy and put him in his sleeping bag, then into his cot all without him waking up, yep he was exhausted, and it was wonderful.